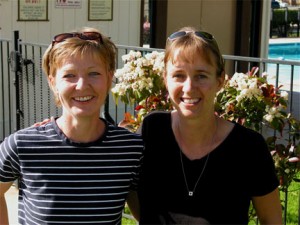 I was born in Frankfurt a.M., Germany. After studying Biology in Frankfurt, I visited San Diego and enrolled at UCSD to study the english language. Althought I planned to stay for only 3 months, my visit extended through undergraduate and graduate studies. I received my Ph.D. in 1995 in immunology and settled in San Diego—I love it here!

I was introduced to teaching as part of my graduate school experience. I also taught medical entry exam (MCAT) preparation courses to undergraduate seniors applying to medical school. After graduating, I continued lecturing at UCSD while pursuing postdoctoral training at Scripps La Jolla. I also taught Biology at a LJCD school. It became clear to me that my career had to include a strong emphasis in teaching!

It is not always easy to maintain a bilingual household, especially when one is in mixed-language company. My children often answer in English, although they comprehend German perfectly. Stephanie and I founded KinderZoo in 2004 because we wanted to build a community of friends who were supportive of learning a second language. Being truly bilingual involves understanding and speaking—and also understanding the culture associated with the language.

KinderZoo has been great for my children, because not only do they meet other German-speaking children, they also are encouraged to speak German rather than simply being exposed to it. KinderZoo gives them a context, a reason to learn the language and it comes naturally when the child understands that he/she grows up in a German community. Both of my children now switch back and forth between the languages, depending on who they need to address. The awareness of the languages as being two separate languages has now truly been understood.

I was born in Munich, Germany. I have been living in San Diego since 2002 together with my husband Ingolf and our sons Ben and Leon.

After receiving my highschool diploma in 1990 I started my education as a kindergarten teacher; I graduated within four years, receiving my diploma. As part of my training I worked in a kindergarten for one year and in a boarding school for visually impaired  children also for one year. I also acquired further practical experience during several internships at various institutions for children.

After receiving the kindergarten teacher diploma I started the study of special education at the Ludwig- Maximilians- University in Munich, Germany. My main focus there was learning disabilities and behavioral disorders of children in Elementary schools.

During my undergraduate and graduate studies I traveled to Belgium and Netherlands where I studied different successful teaching methods in these countries (for example Waldorf- Education). These studies sparked my interest in the “week-plan” teaching method, a student-guided, self-paced and a goal-driven approach to learning.

After a two year long teacher training program (mandatory in Germany) in Kulmbach, a small town in Bavaria, I received my university degree in special education in 2001. Subsequently I started teaching in a school for children with learning disabilities in Munich.

In February 2002 a new challenge awaited: I moved to San Diego to join my husband, who had accepted a position at UCSD. An even larger challenge followed in September of the same year: Our son Ben was born and four years later, his brother Leon!

Now I have a completely different focus in “special” education: raising our children bilingually. What a gift for Ben and Leon! When I remember how difficult it was for me in school to learn a second language and how easy it is for German speaking children here—they were quasi-endowed with two languages from birth!

However, for many children growing up in German-English households some other problems arise: By learning  and speaking English the entire day in preschool, kindergarten and school they are in danger of forgetting their German speaking skills, which is tantamount to losing one part of their cultural roots. While this may seem easier for the children and their parents in the short term, in the long term this means missing out on a chance to participate in, understand and live the cultural diversity a mixed-language household has to offer. I think it’s very important to cultivate your native language and give your children the unique chance to grow up bilingually. This becomes even more important in the face of increasing globalization and a tight labor market.